Entrepreneurial spirits and enlightened spirits often seem to inhabit the same bodies in Costa Rica giving rise to dozens of hotels, albergues, surf schools and even wildlife rescues owned and operated by yoga practitioners.  The recommendations here include some of the “yoga on the side” establishments but barely scratch the surface of the eclectic Costa Rican yoga scene.

In addition to the hosts you might have who practice yoga there are hundreds of instructors who make “hotel calls” and will be happy to meet you in the garden or on the beach in front of your lodging for a private lesson.  Impromptu sessions can also be a great way to meet other guests and people from the community if you ask the host or instructor to spread the word.

Number one on our list of Costa Rica’s best spots for yoga is wherever you happen to find yourself.  Not every pose will be as picture perfect as the beautiful shot below but every waterfall, beach and rainforest glade is an opportunity. 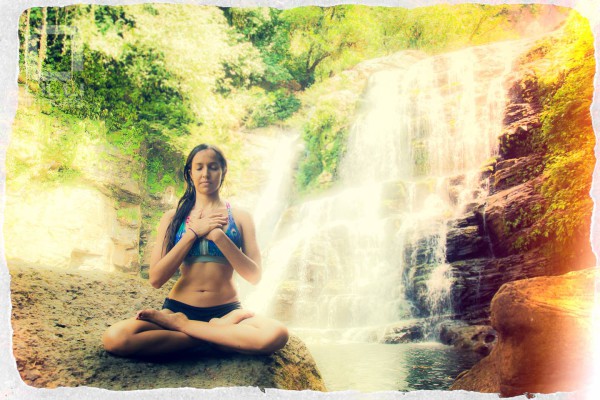 One of our favorite spots and two of our favorite entrepreneurial and enlightened spirits are located at Tortuga Del Mar Beachfront Lodge on Playa Hermosa south of Jacó.  Lilli and Till have created a little slice of paradise with a few stylish spotless oceanfront rooms, a yoga platform in the garden behind the pool and some of the best surfing waves in Costa Rica a few feet beyond the line of coconut palms separating the property from the beach.

On our last visit Sue accompanied Lilli to a class with Anabel Miranda (pictured above) who also led a beautiful candle-lit session on the Tortuga platform the following evening.  In between we hiked to a little waterfalls with a local family as guides and climbed the rainforest covered Fila Chiclera along Quebrada Ganado across the road where we’ve spotted dozens of Chestnut Mandible Toucans, Scarlet Macaws, Collard and Fiery-billed Aracaris,  Mot-mots, and even a pair of highly endangered Margay cats. 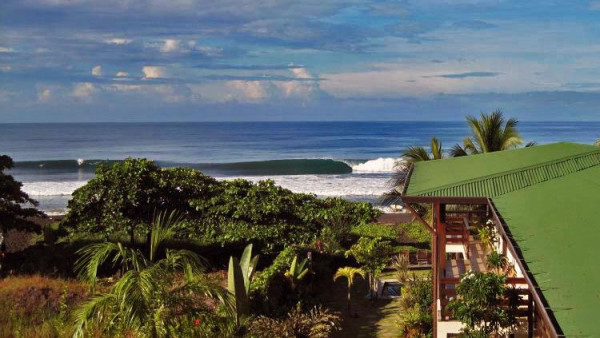 Jacó Beach and it’s multitude of restaurants, shops, condos, bars and nightlife are just a ten minutes away on the other side of Punta Guapinol.  Close enough to partake if you’d like and far enough that you’ll never know it’s there unless you seek it out. 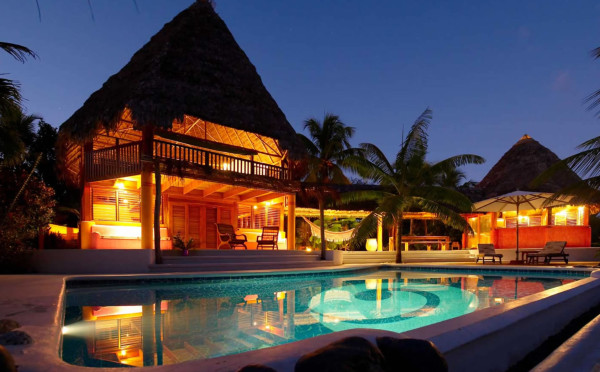 Boca Sombrero Retreat-one of the most tranquil places on earth.

Waves rolling in on the deserted Playa Boca Sombrero, palms waving, scarlet macaws calling, the smell of fresh bread baking…I almost had to stop typing and get in the car…

Boca Sombrero Surf and Yoga Retreat is unique even for Costa Rica.  It’s owned by an eastern European thrash band that uses it for annual decompression but except for the few weeks when they are in residence it’s open to the public.   There’s a beautiful beachfront platform and a number of other stunning settings to practice yoga. Bring your own instructor or plan to visit during one of their many retreats.

In front of the property there are both left and right hand surf breaks at the river mouth which are perfect for beginners.  I can’t imagine anyone wanting to leave even for a few minutes but there are some other great attractions in the area including Corcovado National Park and mangrove kayaking tours near Puerto Jiménez.

After mentioning the bread baking I probably don’t need to assure you that the food is fresh and delicious but I will.   Privacy for the open air bungalows is provided by isolation on the large property and screening foliage. 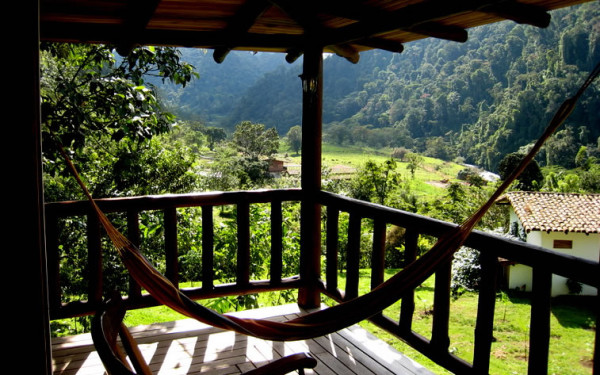 Between Arenal Volcano and the Children’s Eternal Rainforest

We’ve been visiting Juan at his incredible project on the shores of Lake Arenal tucked into a little valley between the volcano and the Children’s Eternal Rainforest Reserve since its inception almost a decade ago.  It’s hard to even know where to begin describing this amazing place.  Off the grid (a little hydro turbine keeps the beer cold and lights on), sustainable and the organic farm produces an abundance of fresh meat, cheese and vegetables that guest chefs transform into some of the best meals we’ve ever had.

The yoga platform is built out over a lake and like the bungalows has a living roof.  The pond is filled with tilapia that sometimes wind up on the dinner table and heat produced as a byproduct of the garden composter warms a spring fed swimming pool upstream.

Something like Shang-ri-la I imagine, you just have to visit to see for yourself. 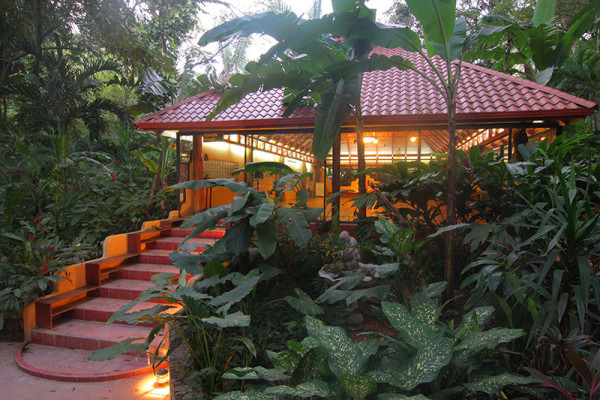 On a hill above Playa Guiones (better know as Nosara Beach) this is Costa Rica’s venerable institution of Yoga and main teacher training center.  Because of the center there are many independent practitioners with small studios who also often make house calls to local hotels and resorts.  The offerings here are much too extensive to list on this review so visit their website to see what’s there for you.

The grounds are tranquil but it’s location a few minutes from the beach is in easy walking distance to a large range of restaurants, shops and bars.  If you choose not to stay at the institute there are at least fifty other small hotels, resorts and lodges ranging from backpacker’s to Luxury with a capital L at the Harmony.

Nosara is best known for its great surfing so if you’d like to mix a bit of both this is a great choice. 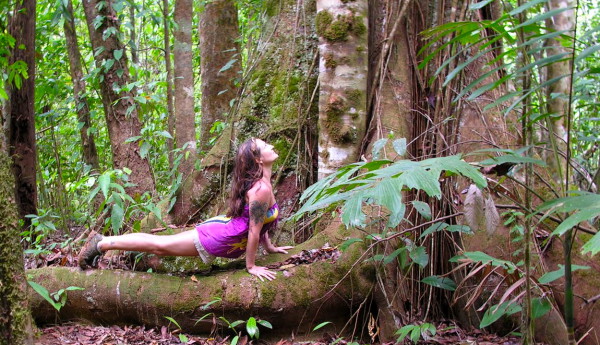 Samasati is the largest and most luxurious retreat on the Caribbean

Samasati is the only Caribbean Retreat on the list.  It encompasses a mountain campus overlooking Puerto Viejo de Talamanca and a beachfront house for visitors who prefer the sound of the waves to the hilltop breezes.

Samasati is eco-luxury at its best, integrating natural surroundings with comfortable but not ostentatious accommodations.  Set in primary and secondary lowland Atlantic rainforest there are short trails to enjoy and the surrounding region offers great snorkeling, waterfall hikes and surfing. 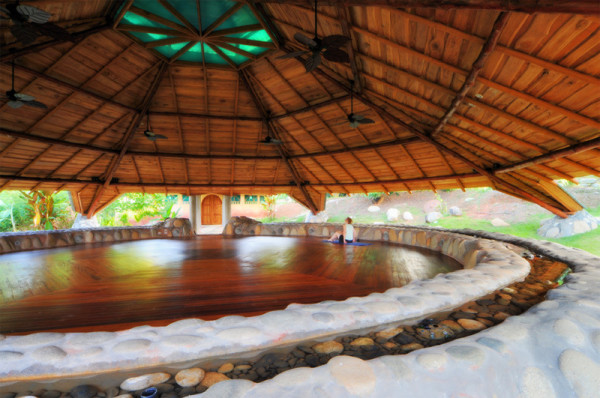 The view from Espiritu Salvage at La Cusinga is breathtaking

South of Uvita on the central Pacific coast La Cusinga was an old favorite before we discovered yoga and now that we can appreciate the design envisioned as “functional sustainability, environmental integrity, simplicity” we love it even more.  Beautiful, simple wooden bungalows share the grounds and the views with the studio and it’s all surrounded by tropical lowland Pacific rainforest with several km of trails to explore – including one down to the nearly private (all beaches in Costa Rica are public but we’ve never seen anyone else there) Playa Arco Iris – Rainbow Beach.

The food is exceptional (no liquor license so if you want wine with your dinner bring a bottle) – organic, and locally sourced when possible.

Another isolated lodge on the Osa Peninsula (see also Boca Sombrero) facing Playa Tamales, Golfo Dulce.  A relative newcomer and we’ve only stopped by, not stayed so we can’t give you any insider scoop.  Looks like a nice place and seem like nice people.

Montezuma is really one of the last best holdouts of funky fun energy in Costa Rica.  Isolated way down near the tip of the Nicoya peninsula you either have to brave a long drive (including a 4WD section scheduled to be paved in the near future – in Costa Rica that could mean 2018) or take the ferry to arrive there.

The beach is well protected by a point and offshore rock formations so fun and safe for swimming and maybe even beginning surfers to play around.  One of the best attractions in the region is the Montezuma waterfall just up the beach to the north then a short hike inland.

Anamaya is an intimate property on the hillside with only the Pacific in front of the yoga platform.  Excellent, fresh, natural food and attentive personal service. 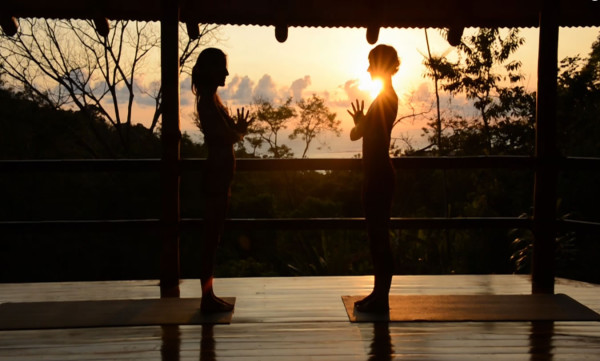 Selva Armonia is on a hillside overlooking Playa Ballena

Catering mostly to retreats for teachers bringing classes, Selva Armonia  features views of one of Costa Rica’s most famed natural attractions – the whale tail – a point of land that fades into a reef of sand that looks almost like one of the humpbacks that frequent the ocean here swam up to take a closer look at the rainforests of Marino Ballena National Park.  Of course with a vantage point like that the sunsets are also spectacular.

All of the images above are linked directly to the websites of the retreats, hotels and institutes or you can use this list for quick access.